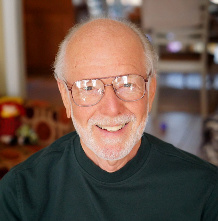 I am a retired engineer/manufacturing manager living in Dover, Delaware with my wife Joan.

During my childhood my mother would prepare WONDERFUL breakfasts on weekends of fried bacon, sliced potatoes and eggs fried in bacon grease! In addition, we used liberal amounts of real butter and ho-made grape jelly made with large amounts of sugar on our white toasted bread. And we drank real unpasteurized cow’s milk delivered fresh to our back door.

Our other meals throughout the week center around beef and pork, potatoes. Some fresh vegetables from locally grown produce were eaten during the summer months. During the other seasons we ate canned green beans, lima beans and peas.

Lastly, we ate large amounts of ho-made style pastries, cookies, breads, cupcakes, donuts and more that were prepared by my grandfather. He was of German heritage and possessed excellent skills at preparing old fashion style German bakery goods. Three times per week he delivered fresh bakery goods to our door in large amounts from his delivery truck.

This almost glutinous eating of bakery goods contributed to my weighing in at 195 pounds when I was 14 years old.

Then at this young age I became aware of my obesity. Without discussion or notice to anyone I voluntarily cut back on my eating and within 6 months weighed 145 pounds. I was now extremely thin for I was almost six feet tall.

So, throughout my adult life I maintained a slender body frame by my own self-discipline with regard to the amount of food that I ate.

During these years there were more and more proponents of eating a lower fat diet. Nathan Pritikin who established Pritikin Longevity Center in 1976 advocated heart disease prevention and reversal using a low fat diet. I read his books about low fat diet and his personal success with the reversal of his heart disease.

Through the years, I adopted a low fat diet approach of my own design. I used a low fat approach of not eating red meat, eggs and whole dairy products. I continued to eat white meat chicken and fish. However, I never converted to vegetarianism. This diet aided me in controlling my weight but it did not provide any other apparent health benefit.

After 35 years of studying and experimenting with various dietary programs, I found that none of them provided me with satisfactory health results.

Then in January 2009 at age 66, a diagnosis of prostate cancer changed my life and my dietary disciple.  Following successful surgery, I gradually lost control of my dietary habits and my weight increased from a long time baseline of 180 pounds to a peak of 238 pounds several years later.

Then on Sunday August 21, 2011, I saw a news brief about a forthcoming CNN special with Dr. Sanjay Gupta. The hour long special was to feature Dr. Caldwell Esselstyn’s work with reversing heart disease using a vegan, very low fat diet. The special also included the story of President Bill Clinton’s adaptation of this diet.

Although I had not as yet seen the special, I searched the internet and download Esselstyn’s book to my Kindle. Beginning that day, as I read the book, I decided to immediately begin vegan lifestyle. My weight dropped to 210 during the next 15 months due to the vegan dietary lifestyle.

As I continued to study about the aspects and benefits of eating a vegan/whole foods diet, I became aware that I could benefit further from a doctor or specialist who was more advanced than myself in the science of whole foods dietary living.

In December 2009 while reading Dr. Pam Popper’s book, “Solving America’s Healthcare Crisis”, I discovered that she had an affiliate Wellness Clinic in Wilmington, Delaware. The next day I called and spoke with Dr. Jane Powley, owner of the Wilmington clinic. I agreed to meet with her on December 20 for my first consultation.

The immediate major directions that she provided me are the following.

Other refinements have been added to my diet since that time.

Now eight months later, I can report the following improvements to my physical wellbeing.

My weight has further dropped to 172 (a loss of 66 lbs.) The total cure of my twenty-year bout with eczema of the knuckle areas on my hands. Over the last twenty plus years my total cholesterol ranged from 195 to 255 with an average of 210. It is now down to 156. My triglyceride level which had been diagnosed at an unacceptable level of 337 is now at 69. What had been aches and pains of the joints, etc. (I’ll call it a 10) is now more like a 1-2. I move around again like I did as young person. I now live a medication free lifestyle. I have gained major improvement in my vitality and energy levels.